Prague Media Point is an international interdisciplinary conference for journalists, media professionals, scholars, policymakers, and activists, organized annually since 2012. Part of the conference’s 2020 edition focused on the safety and practice of investigative journalism in V4 and the Western Balkans countries.

In recent years, threats imposed on investigative journalists have increased. It is evident that they need to acquire the knowledge and tools to be able to protect themselves whilst carrying out their work. At the same time, the nature of the investigative cases they follow has become increasingly international, which prompted many cross-border initiatives. The Prague Media Point 2020 project was created with the goal of leveling the playing field for investigative journalists and media experts in the V4 and the Western Balkans regions with those in the rest of the world in terms of access to current information, skill-building, and networking. Media professionals from these regions, who are often underrepresented at large international gatherings, got to be included in the conversation. The project provided a platform for showcasing replicable examples of what is working in investigative journalism.
Moreover, a new generation of journalism students took part in the gathering, where they put their skills to work and started building connections within the journalistic community. “The Prague Media Point is a must for leading media makers in the region.“  Patrick Leusch, Head of European Affairs, Deutsche Welle . The Prague Media Point 2020 took place entirely online, selected pictures showcase previous years. Recordings from selected discussions and workshops of the conference can be accessed at the conference website.

The project was realized by KEYNOTE Ltd. from Prague with the project partners Albanian Media Institute from Tirana, Balkan Investigative Reporters Network (BIRN) from Sarajevo, the Budapest Metropolitan University,  Crime and Corruption Reporting Network (KRIK) from Belgrade, N Press from Bratislava, Faculty of Social Studies of Masaryk University from Brno, Faculty of Political Science and Journalism of the University of M. Curie-Sklodowska from Lublin, Center for Independent Journalism from Budapest, Stanislaw Brzozowski Association/Krytyka Polityczna from Warsaw and Transition from Prague. 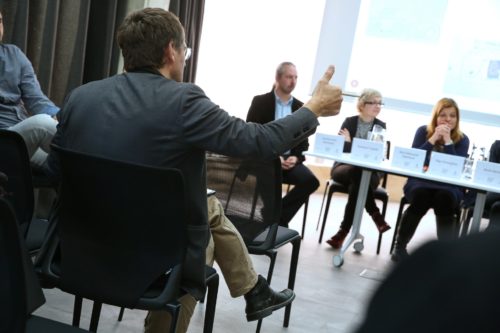 Democratic values and the freedom of media