Wilderness on the Border

Do you know that Protected Bird Area Sysľovské polia located on the border of Slovakia, Hungary and Austria inhabits unique bird species that live only in this area? Unfortunately, the birds are now facing tremendous threats coming from very dangerous specie – humans. People living close by to Sysľovské polia enjoy its nature for recreation purposes. Legal restrictions and limitations due to conservation of nature are however often not followed because the people are not aware enough about the importance of this area. Especially in case of rare species, such as the Red-footed falcon, such disturbances can affect its whole population. Also, the critically endangered Great bustard is under high risk of this threat, especially in winter.

The project ´Wilderness on the Border´ set its aim to raise awareness of local communities towards valuable areas in their neighborhood. As a result, at the end of 2019, 15 nest boxes were installed in the frontier region of the Area. By 2020, three bird species occupied the nests – Long-eared owl, Common kestrel and Red-footed falcon.

During summertime, the project partners created three wetlands to achieve increased biodiversity in the Area. Not long after, frogs were observed in the area which are delicacy for the Red-footed falcons. At the same time, five walls for reptiles were built which created optimal conditions for their spreading, thus enlarged the dining menu for the birds.

Not only did the project build nests for the birds, it also streamed it online for general public to increase people’s interest on the topic. From Spring 2020 on, four nests were monitored by three cameras. Altogether, the live streaming reached 6 642 000 views from more than 30 countries. That probably makes them the most popular birds on Earth!

Lastly, the project also organized three guided tours in the Area with the young participants from local primary schools. In the course of three days, the pupils could observe not only the species of objective (Great bustard and Red-footed falcon) but also more than 20 bird species migrating through the Area of Sysľovské polia at that time. They also got to know the area, including its conservation and history. 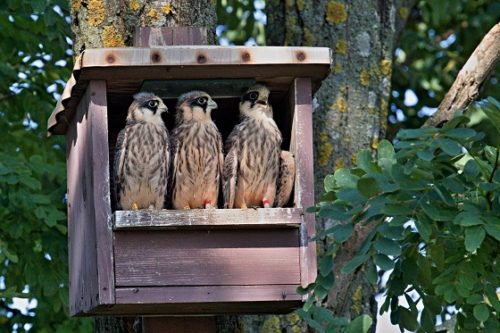